The moment has come when we can make an official announcement about the inception of our project! After a huge amount of effort and difficulties, we can finally show our progress. We have gathered all our experience, respect our testers’ feedback to bring the maximum joy from the game, meanwhile NOT changing the key-points of the common High-Five. We have merged the unique concept of mid-rate server with the low-rate world.

Anyway, we were thinking what would it take for you to play on one server over 3? 6? months. The answer is clear:

-Updates every week - Nowadays most of admins just open the server and they do not any changes until it’s dead… and then new one appears with the same settings. We gonna change it and we promise, that at least every second week we release an update contains changes in balance, some fixes and new content.

-No more Attributes/Fundations//Auto Enchants/GCM’s etc. in shop/donate shop. We thought a lot about the donation system and our solution is: Premium Account + mostly visual objects. You neither won’t see armors/weapons/jewels with a grade greater than Icarus/Dynasty. More info on our forum.

So… Every player who loves to PvP 1 vs 1 or even team vs team, should call his friends and create a party to rape some asses in the game! This project is created for people, so you must join our community!

Everything is described in the bellowed specifications.
The concept can be changed a little, but all changes are going to be mentioned here and on our website/forum.
You can discuss and suggest your ideas on our Forum and by participating in our Polls.

Question: Are you tired of servers who open and close every 2-4 weeks?
Answer: We are focused on opening one server without any wipe. We know, we know – every server promising that bull shit. In this case, the server was created, among others, from such an initiative. Probably we will open a new one in the far future, but it will be merged with the existing one.

Question: What about bots? Do you have any solution?
Answer: We’re currently using smart guard 3.0, which as we all know, doesn’t have 100% guarantee of antibot protection. Therefore we have implemented additional security – let me explain. In certain cases, while using the bypass player can be jailed or banned and we will receive the notification. This system requires improvement, but we are on the right path --> Test it out!

Anyway, we gonna hunt them, till they stop!

Question: Do you allow any change in an interface?
Answer: Unfortunately no, but we will prepare simple, nice-feeling modifications and in the near future we’re going to implement interface from higher/lower chronicles.

Question: How is the issue of balance between classes?
Answer: Let us not kid ourselves, because lineage 2 was never a balanced game. This is also the first reason that we’ve chosen Java files. Since December 19 we had opened Alpha Test server for about 40 people, through which we’ve fixed most of the issues. What’s more, we have implemented systems that collect and process informations from the game to our database. This solution will allow us to transfer data to the chart and we will see what requires changes. In all honesty, I must say, that we modeled on League of Legends, so formulas depend on base stats(men/con), resists, the level difference is a little bit fixed. Furthermore, every week will be update in statistics/skills, only if you get involved to help us make this game better. That’s why certifications skills work on every subclass. We say no! to flaming about something works wrong or it’s overpowered. Support is almost available 24h/7 on forum/discord/Facebook, so write your issue directly to us or via forum if the case needs players’ opinions. Additionally, the [Bug Bounty Program] is functional on our server.

General information
Server Platform: Java Files
Drop&Spoil: based on l2jserver.com
Maximum Clients per HWID :
1+1 without premium
1+3 with premium
Auto Learn Skills: up to 85lvl (Poll on forum if you want to change it to 80lvl)
Auto Loot: On
GM Shop: up to S grade
Mana Potions: 1000mp every 12seconds (reuse time can be increased depends on players opinion)
Auto CP/HP/MP: On
PvP zones: All epics & 3rb
Updates: Every week
Debuffs: The player is immuned on the same debuff if he has it. Next one(identical) has a lower chance to land rate for a few seconds

VOTING for SERVER:
Available from the server Grand Opening. As a bonus, voting players can get Life Stones, Attribute Stones/Crystals, Scrolls of Enchantment (weapon/armor), Vote coin. In addition, every 12h players receive vote rune, which gives +1 to all statistics like STR, MEN, CON and increasing 10% of Adena/Drop.

Game Currency:
The game has 5 different currencies that you can use in the shop:
Adena - you can get it by killing monsters in the game world.
Credits - special currency players can receive by supporting us (for premium). (donation)
Donate coin - to get DC you need to exchange your credits 1:1.
​Festival Adena -received for participating in events.
​Vote Coin - received for voting on our server (all links on the website).

Buffer:
Buffer is available in the menu by Alt+B.
Buff duration: 1 hour.
Number of slots: 24 buffs, 12 songs/dances
You cannot use Alt+B buff during the battle as well as 10 seconds after the resurrection.
Crafter buffs are not available and time duration is decreased to 5min (Every custom agathion has craft buff for armor and it doesn’t work on olympiad)
-Dance of berserker (2min) - not available
-Dance of Shadow (2min) 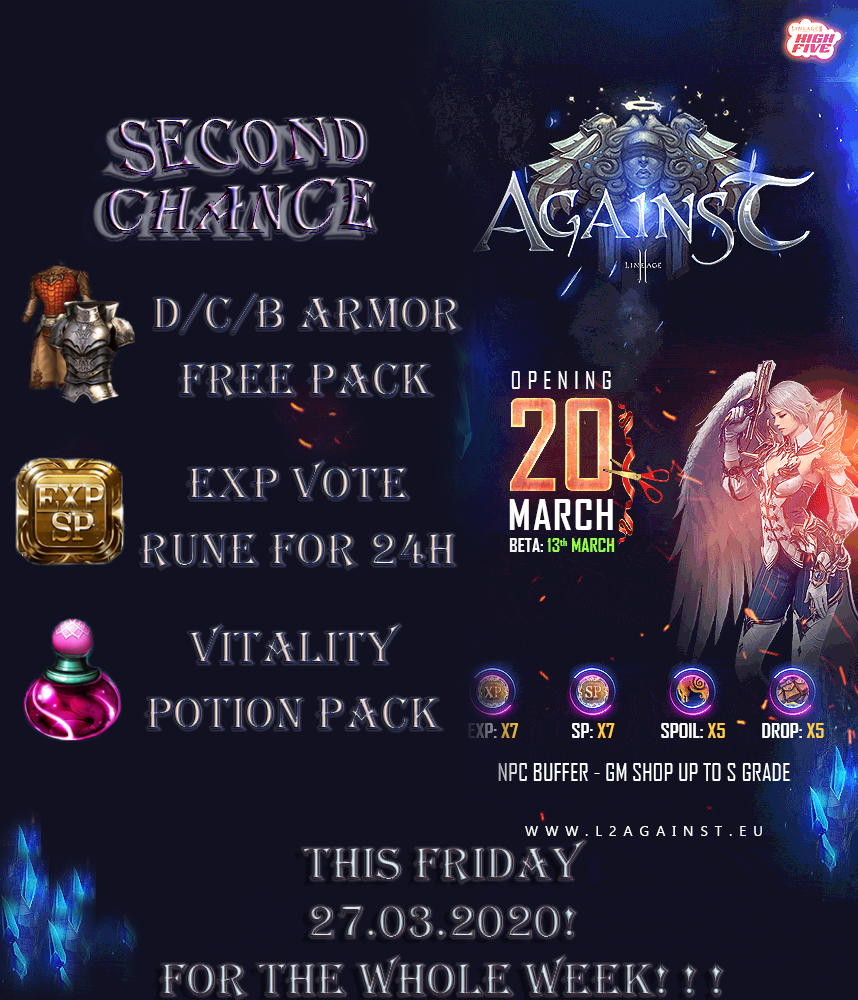